As many of you probably know, the first expansion for Sid Meier’s Civilization VI is on its way. Rise & Fall will be released on February 8th, 2018. And I got a preview copy to show you some interesting bits beforehand. Courtesy of 2K Games and 2K Netherlands for providing me with the preview access.

This preview contains all what is released up to now. That means the final three civilizations are missing and I do not know them. All game play mechanics are in and playable as far as I can tell.

With this also comes the open invitation to ask me what bits you’d like to see. I’ll do my best to check that and highlight in a blog post here or video on my Youtube channel
Keep in mind I cannot and will not share any files, raw XML or other snippets from the code.

I will go into each civilization in later posts separately. Now, I said something about these being confirmed. That is because in the communities, most notably CFC, there have been found several clues. Varying from hints in the art files of the game, accompanying XML files or just in blurry screenshots, but they ended up concluding the following are the most probable last 3 civilizations:

If those are the actual choices that Firaxis Games has put into the game remains to be seen, but in the past CFC has often been correct. 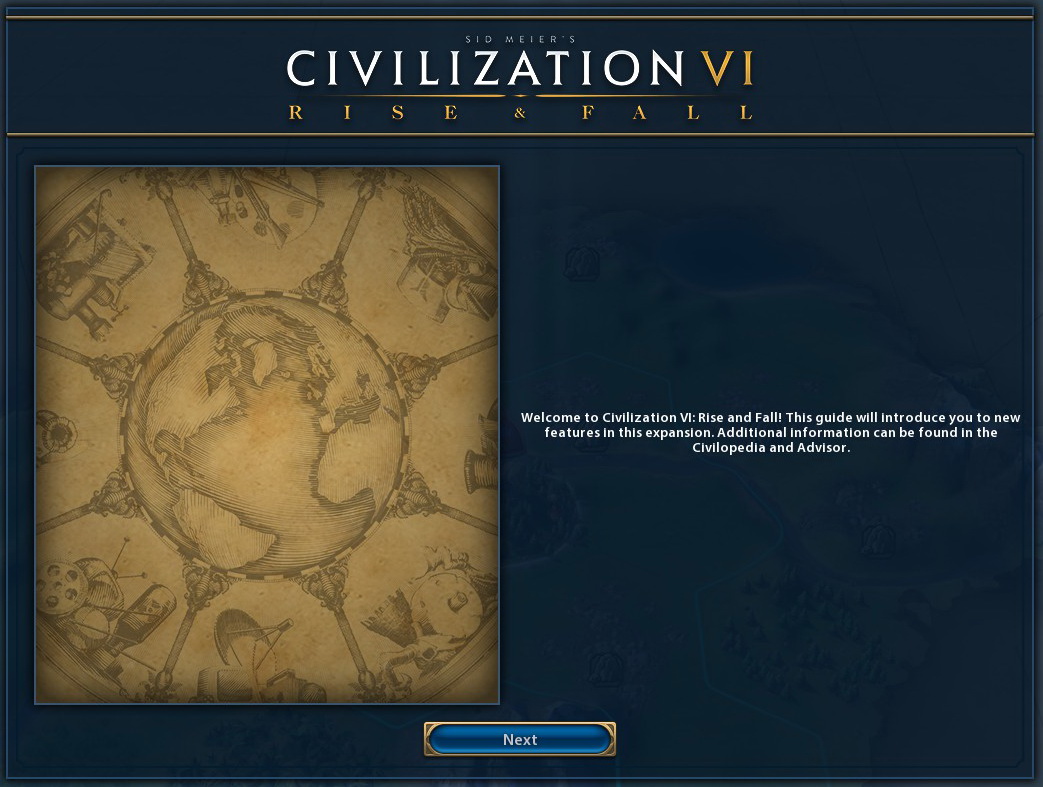 Of course this would just be a regular DLC if there were no new features. So what are those then?
Firaxis Games has been so nice to put in a New Features part. Which is accessible after starting a game, from the menu there. I’ll be going through the parts described there in this blog post as well. A very fun feature for me. No impact on gameplay, but very nice to see a way to sort of create an history book of the civilization your playing. It contains major and minor moments and in general looks cool! 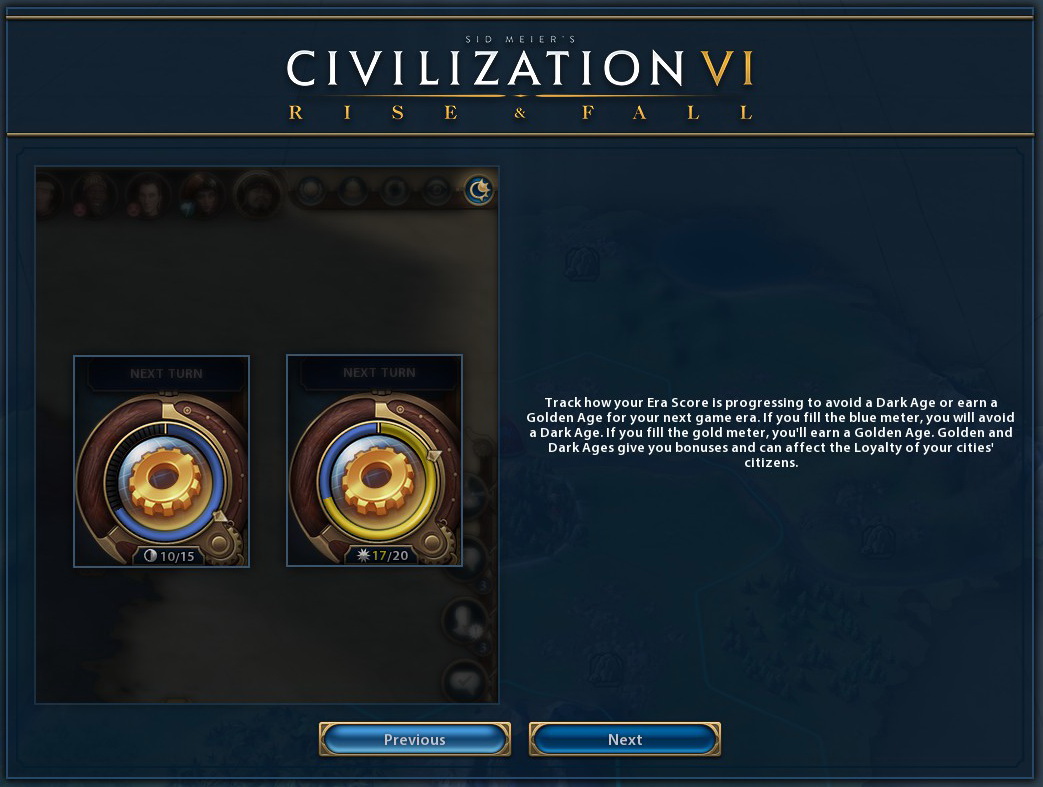 During the game you’ll get Era Score. For each era in the game there are tresholds and if you fail to reach those, you go into a Dark Age. Or if you manage to get the first treshold, you get a Normal Age. Then there is also the Golden Age, if you reach the high treshold. 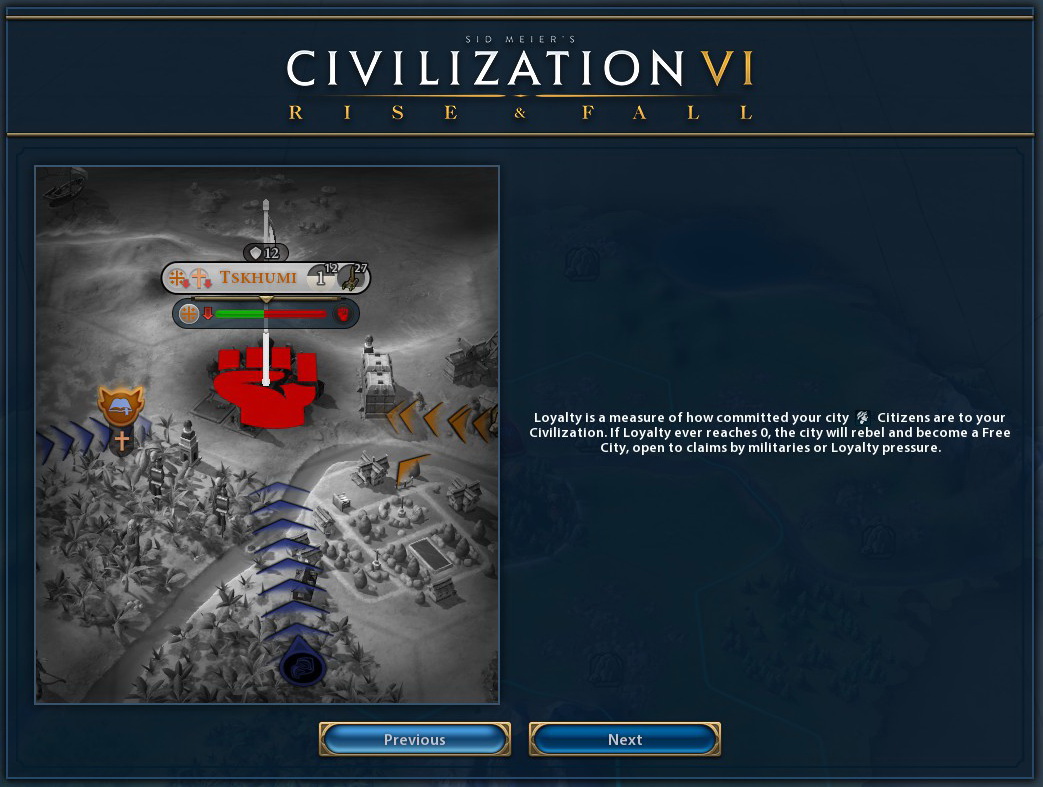 I think this is one of the more interesting features. It puts a limit on endless expanding and keeps you on your toes during conquest. The latter because you need to check after you conquer a city, if you can keep the city despite Loyalty pressure. Otherwise you might lose the city before you can even make peace! 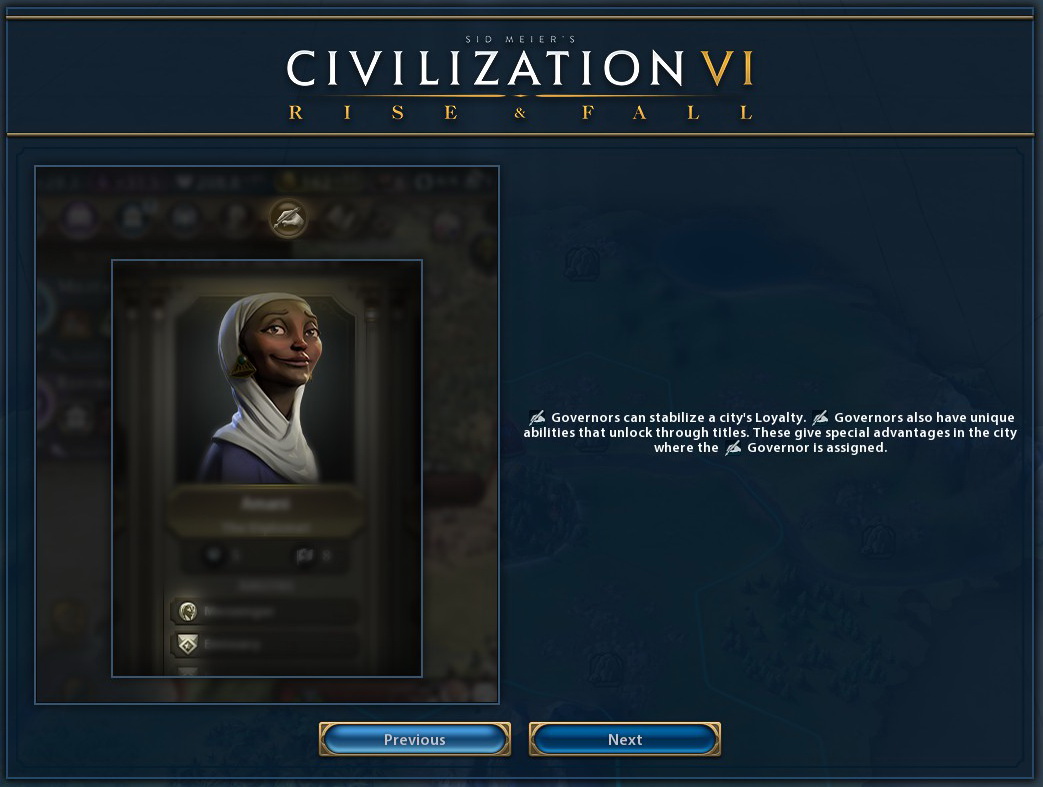 Governors are very interesting. You assign them to a city and their effect is to that city. Although Amani actually can give you a ranged effect over 9 tiles. She can give other cities you do not own Loyalty pressure towards your civilization. Or your other cities within 9 tiles an extra +2 Loyalty per turn.
There are a total of 7 Governors to choose from. They have the same name and portrait for every civ and each and every game.
There has been some complaining about that in the communities, but I very much like that. It means I can recognize a Governor very easy after a few games, since they are always the same! 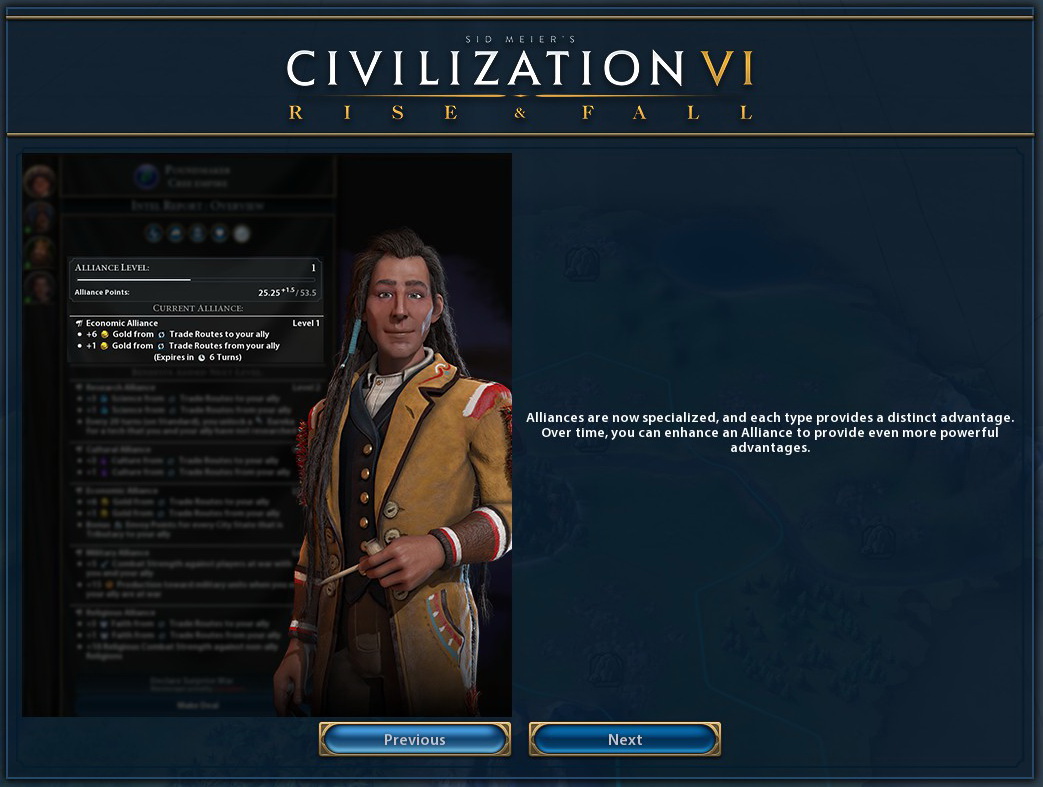 In the base game there is an Alliance. You have to be a declared friend and then can go the next step. This next step has been deepened. You now have the choice of 6 types of Alliances. Only one of those provides shared visibility (Military Alliance) and you have to work for that as it only comes at level 2. Yes, Alliances now level up over time. The bonusses from the levels stack. So a level 3 Alliance will give its bonusses and include the level 1 and level 2 bonusses.
Sending Trade Routes is the fastest way to level up your Alliance with another player. And all Alliances provide Open Borders and a Defensive Pact with both parties.
Keep in mind though that you can only have one type of Alliance at a time with a given civilization. You can of course create another type Alliance with another civilization. 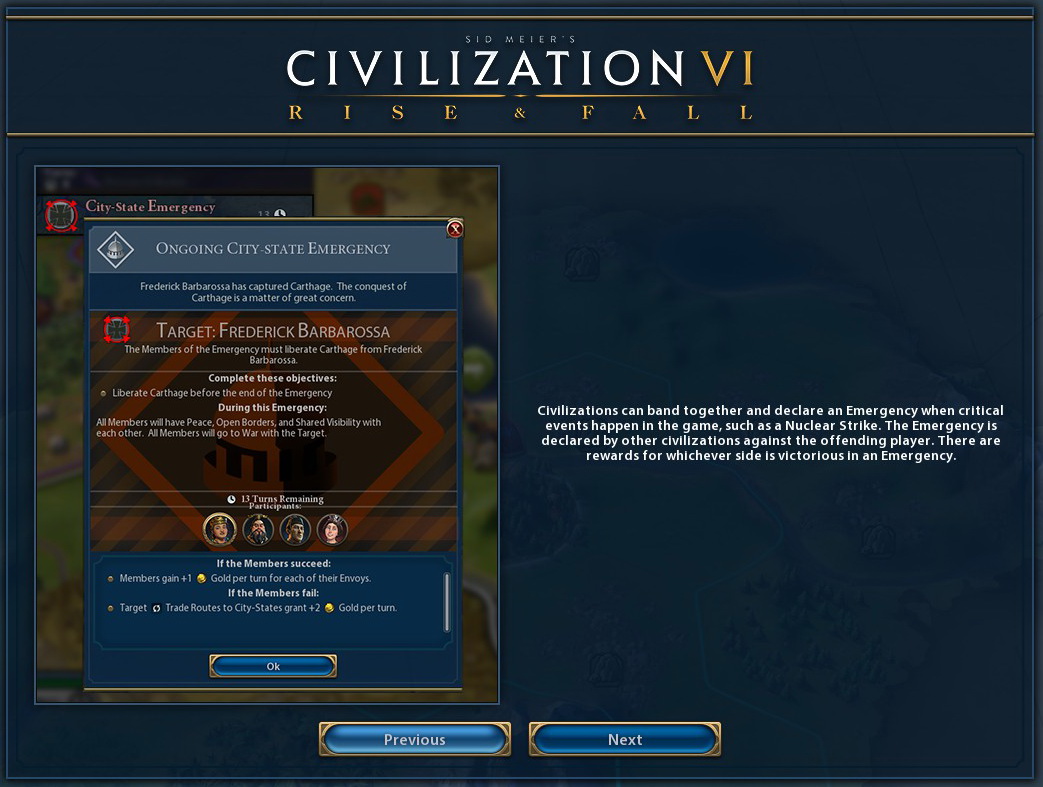 An often requested feature is the World Congress (last present in Civilization V). And that is still the only missing major feature from Civilization VI. But In Rise & Fall there is a first step in this direction.
Emergencies allow for temporary banding together with other civilizations to set a big wrong right in the game world. For example when a civilization conquers to many City States. Or when a Holy City is captured. Or when a nuclear missle is fired.
Band together and reap the rewards, or fail the emergency and suffer the concequences.
I really like this concept. There is one downside though. It can happen that you are the only one participating. While the reward is then quite big, it can become almost impossible to actually win. And this also goes the other way around, when the Emergency is against you, and only one AI enters, it will be very easy for you as the player to win. 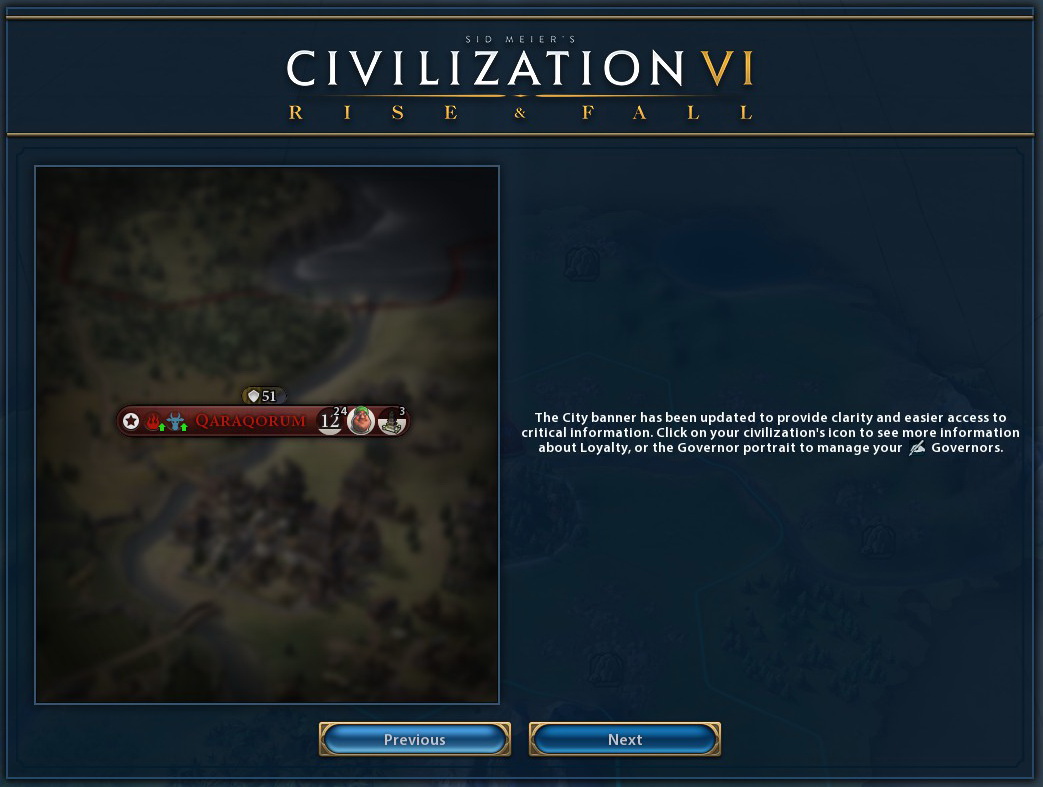 In the base game, one of the UI parts that could become hard to get all your information from, was the City Banner. And now with the new features from Rise & Fall this problem could even be worse.
Luckily Firaxis Games went ahead and sat down to re-do the City Banner. In my opinion it has become a lot clearer and easier to get the needed information from it. The City Banner will also show information above the colored bar (next to the city strenght) when that’s appropriate.
All in all, a needed change!

For me this expansion does way more then Gods & Kings did for Civilization V. In other words, it’s a very well rounded expansion with both new features that are fun to play with, as well as existing features that are deepened.
Also I have not run into the issue of starting (almost) immediately next to another civilization anymore. And I did two series of restarts to test specifically that. I have to conclude that their solution to this problem, as stated in one of the live streams earlier, really works. I get balanced maps with civilization and City States nicely spread out.

Thank you for reading and please send me any questions about the expansion and I’ll try to address them.
Simply contact me by email (donald23@donald23.nl) or twitter!