Time to share my thoughts the part of Sid Meier’s Civilization VI that has to do with growing your cities.

With the information released so far, we know a few things. The two most important things are that growing a city consists basically out of two parts. Namely having enough housing and having enough amenities. 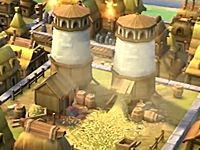 The other limiting factor is amenities. Where you can get your amenities isn’t completely clear yet. A lot of debate is going on that subject. What I found in my play through at the press event (see my post here: Civilization VI: Press Event) is that luxury resources are contributing to the amenities. But after that it’s a bit unclear as to how they help in your cities. We do know that happiness is calculated on a per-city basis. 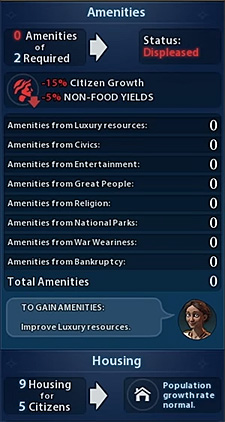 This lists the sources of amenities nicely. We can take another little thing from this screenshot however. Mainly that if you do not have enough amenities, it will affect growth and other yields. In that way it’s similar to happiness in the former installments of Civilization.

This means that we are returning to a system where there are two mechanics responsible for city growth. The last installment to have that was Civilization 4 and Civilization 5 did away with that. While understandably (because the Civilization 4 implementation wasn’t really any good), I feel this adds complexity and depth to your decisions on what to do to facilitate growth.

There is one last thing, and that is that the screenshot points out that War Weariness and Bankruptcy are returning and can provide (presumably) negative amenities (I cannot phantom a scenario where those two provide actual amenities ;-)). I find that those two mechanics are in good. That should be giving some fun extra decisions in the game. But hopefully more on that later, as those mechanics haven’t been announced or discussed yet in the published materials.

All in all, I think this is going to make one of the best growing mechanics we have seen thusfar in any Civilization game! It is no longer the rather strange, duplicated way we had in Civilization 4, nor the just global happiness thing from Civilization 5 (which to be honest, was kinda lacking on top of global happiness being frustrating). We now get two seperate mechanics, and both will require attention of the player to manage well.

I’ll try to play some at GamesCom and verify how the amenities from luxuries work there!